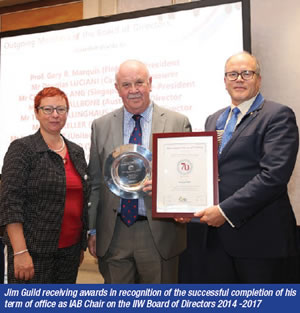 The position of IAB Chair and the associated IIW BoD Directors’ position, which Jim Guild recently vacated, is the final achievement in his long and outstanding career with the IIW.

Jim strengthened the position and participation of South Africa in IIW since his first participation in 2001. Then he became actively involved as Chair of IAB Group B from 2004 to 2011 and also participated in C-XIV and SC-QUAL.

Apart from all of this, Jim was the organiser of two IIW congresses in 2006 and 2012 and contributed actively to the development of IIW membership in Africa, especially with Nigeria.

As BoD member Jim has always been committed to active participation and took the leadership in many difficult projects, including compliance and the introduction of the International Welding Inspectors Scheme.