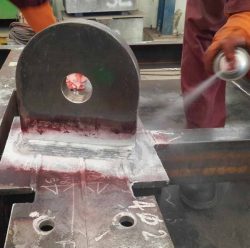 Penetrant or liquid penetrant testing (PT) refers to a surface type non-destructive testing method that allows a liquid (containing dye to increase visibility) to fill an empty void, which is open to the surface, due to the capillary action of the liquid. Once the excess penetrant is removed from the surface a developer is applied to the surface which allows the penetrant to be absorbed into a contrasting medium (normally white powder) revealing the presence of a discontinuity. Penetrant testing can effectively be applied to any type of material, as long as the discontinuity sought, is
open to the surface.

If you enjoyed chemistry at school and your interest in liquids exceeds that of swimming and the occasional beer, then we invite you to start your career in one of the most basic yet useful NDT methods around.

Inspection techniques depend on whether the dye used is under normal light or backlight conditions (or both), the type of penetrant, excess penetrant removal process as well as developer used during testing.

Furthermore, since temperature has an effect on the liquid properties such as viscosity and evaporation special techniques are applicable at excessively high and low  Temperatures.

The training course is based on general theory as well as sector specific applications relating, but not limited to, the following standards and specifications: