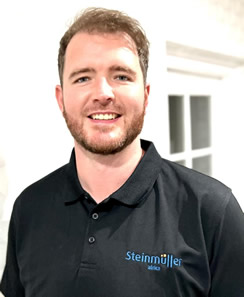 Whether you are starting in the industry, or just need a little motivation to push on, Friedrich Schwim’s inspiring career path and success are bound to remind you that anything is possible. It is clear that he embodies the words of Benjamin Franklin who said, “Without continual growth and progress, words such as improvement, achievement and success have no meaning.”

The SAIW has played an integral role in the formation and education of hundreds of Welding Engineers and Technologists in South Africa, and Friedrich is one of those exceptionally accomplished Welding Engineers who have benefitted from the value that the SAIW contributes to the industry.

Friedrich has been employed by Steinmüller Africa since 2013, after completing his Bachelor of Engineering (B.Eng) degree at Northwest University in 2012. As a professional engineer, he has been exposed to all the aspects of manufacturing but was particularly drawn toward welding and metallurgy.

Because of his deep seated passion and desire to expand his knowledge, he was led to further his studies and completed his B. Eng Honours in Welding Engineering at the University of Pretoria in collaboration with the SAIW in 2015.

It is Friederich’s humility and dedication that set him apart and his passion for all things engineering and welding are fuelled by a constant desire to improve and achieve. His journey with the SAIW has been a consistent and fruitful one, and he sees holistic value in each course that he has completed. Included in his impressive resume are:

According to Friedrich, each of these courses is vital in the welding industry. Even one such as Welding Symbols, which may seem simple, is key to forming a foundation rooted in an understanding of the field. The ISO 3834 course is the backbone of the welding industry and gives excellent insight into the basics of maintenance and compliance. Every course that he has completed through the SAIW has been central to his growth and development, and although it has been difficult to balance his work and studies at the same time, the support from both his work team and the SAIW largely contributed to his success.

The understanding and knowledge that Friedrich has gained throughout his career are nothing short of inspiring. He maintains that a Welding Engineer is more than just a qualification that meets the eye on a piece of paper. The behind-the-scenes work and effort challenge a team and are the key to either making or breaking a project. He believes that welding teaches and imbues humility and that the success of a team is dependent on every member. He feels privileged to have walked this journey with the SAIW, and revels in his steady track record with Steinmüller Africa.

Loyalty, expertise and commitment are rare traits in today’s world, but Friedrich is inarguably a cut above the rest. He is intent on using his expertise to the benefit of the welding industry within the scope of Steinmüller and takes the future of his company and the Welding and Metallurgy industry as a personal challenge.

He aims to do his best in enabling South Africa to become a world leader in these industries and believes that this would largely depend on the country as a whole keeping up with global trends in technology. And to do his bit, he is committed to continuous learning and development, which could very well see him returning to the SAIW in the future.