You see, but do you observe? 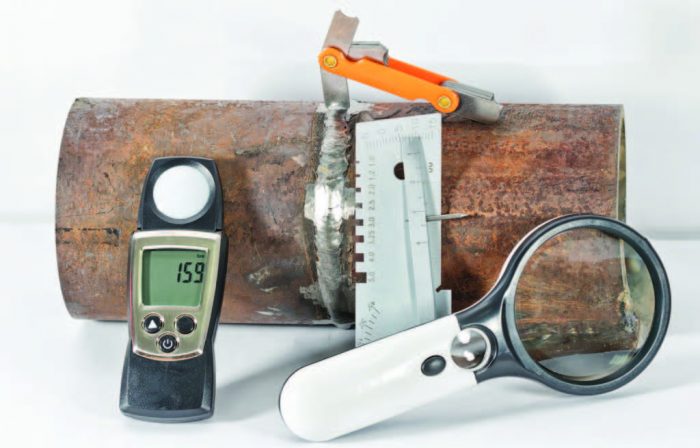 Visual testing is the most common and essential of all Non-Destructive Testing (NDT) methods. Unlike other NDT methods which require either special equipment or consumables to reveal an indication, visual testing, in its most common form, only requires one to look at a surface and interpret what one sees. However, to quote Sherlock Holmes: ‘You see, but you do not observe’. Herein lies the need for proper training, qualification and certification for visual testing personnel to ensure that they are and remain competent to perform this basic yet powerful non-destructive test.

What is visual testing?

Visual testing can be described as the visual observation of a test surface to identify any discontinuity. Discontinuities include, but are not limited to the following:

What techniques are available?

Basic visual testing method can be separated into three techniques, which are:

Human vision forms the basis of all visual testing methods and the principles, problems and processes associated with the human eye must be clearly understood. Principles of light, sources of light, colour and visual perception relating to the observation and interpretation of the testing surface are important while a thorough understanding of optical principles and image processing is essential when using additional equipment to capture the surface image.

There are no limits to the application of visual testing which basically requires a clean surface accessible either directly or remotely. All product sectors such as welds, castings, forgings, tubes, pipes, wrought products, etc. are included with industrial sectors ranging from pre-and in-service testing to rail, power generation, petrochemical, mining, civil, paper and pulp, transport and many others.

As in the case of all NDT methods, visual testing should also be included throughout the manufacturing, construction, operation and maintenance phases. According to ISO 17637 for example, visual inspection of welds should include:

What is the difference between visual inspection and visual testing?

Visual inspection, as performed by welding inspectors, is the observation of any operation performed on materials and / or components to determine its acceptability in accordance with given
criteria, the codes of construction and the assessment criteria in order to decide if a weld is acceptable. Depending on the code of construction and/or the client’s requirements, the welding inspection may or may not require that the inspection is undertaken by a qualified and certified Visual Testing Technician who will generate the NDT report. To this extent inspectors should have sufficient knowledge regarding the process.

On the other hand, visual examination or testing refers to the actual process of determining the condition of an area of interest by nondestructive means against established acceptance or rejection criteria, i.e. NDT personnel perform the visual test and provide the NDT report. To this extent NDT personnel must be qualified and certified for the visual testing method, to the appropriate qualification level, as stipulated in the relevant certification scheme

Please note that ISO 9712 also complies with ASME requirements. Furthermore, ISO 9712 excludes direct unaided visual tests and visual tests carried out during the application of another NDT method as part of the visual testing qualification.

Each of the mentioned qualification and certification processes depends on suitable training as described in the relevant syllabi viz. ASNT CP 105 and ISO TR 25107 respectively. The documents clearly define the relevant theory and specific applications that should be included in the training program.

The use of drones has been a significant development in the field of remote visual testing. Therefore a visual testing qualification and certification should be mandated for all personnel providing drone visual testing services, apart from the statutory requirements of operating drones.