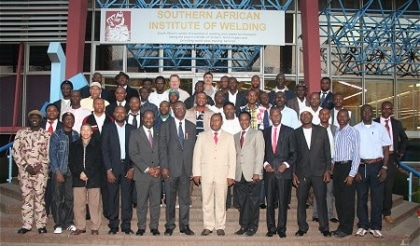 In the troubled oil-rich Niger Delta region in southern Nigeria many former militias, having rejected militancy, are now ready to swap their guns for welding rods and the first group of Niger Delta welder trainers who will help train them and the youths of the Niger Delta region, recently graduated as International Welding Practitioners (IWP).

“The need for welders in Nigeria and particularly in the Niger Delta is dire, and it is pleasing that for many militants who have been involved in the conflict and who have decided to return to civilian life, there a group of qualified welding trainers who will help them with this transition,” said Nigerian Welding Institute (NWI) President, Solomon Edibiri.

Mr Edibiri was talking at the recent graduation ceremony of 30 people from the Niger Delta region who received their IWP certificates from the Southern African Institute of Welding (SAIW) at its premises in Johannesburg. Mr Edibiri said that this was a significant occasion as these people would take what they learnt and train other welders to train other welders and so on. This cycle, he said, would eventually help to overcome the massive shortage of skilled welders in Nigeria, West Africa and Africa as a whole.

He added that that the SAIW and the NIW are meeting this challenge head on. “Since our collaboration agreement in 2007 we have worked together to train over two hundred welders and instructors and the NIW has received sound mentorship from the SAIW in its journey to internationalise the NIW and indeed the welding Industry in Nigeria,” he said.

One way of achieving this is through the training of internationally certified welders, as welding is one of the most important skills in engineering and by extension the oil and gas industry, which is so vital to our economy,” Mr Ugwoha said.

He also paid tribute to the collaboration between the SAIW and the NIW and commented on the fact that SAIW instructors have worked hard in Nigeria at places like the Petroleum Training Institute to train Nigerian welder trainers. “This is the type of cooperation we expect from not only professional bodies but also other institutions. I hope that both SAIW and NIW explore more ways to advance the level of welding technology on the continent,” he said.

Jim Guild SAIW executive director said he was delighted at the progress being made with the Nigerian ‘train the trainer’ initiative and paid tribute to the NIW and its sponsors like the NDDC. “These are unusually committed people making a palpable difference to the welding industry in Nigeria and to that country as a whole,” Mr Guild said.

He also made special mention of Willie Williams, senior SAIW trainer responsible for the Niger Delta group. “This was one of the best groups we’ve ever had,” Mr Guild said, “and much of the credit must go to Mr Williams who created an environment conducive to disciplined and fruitful learning.