The team of five SAIW welders, sponsored by the MerSeta, that recently participated in the third edition of the Arc Cup, comprised three female competitors out of the total of five. “This shook up the competition organisers in terms of recognising the power of women in the welding industry with the result that a dedicated Arc Cup for women is on the agenda for all future  competitions,” says SAIW’s Etienne Nell whose participation on the Arc Cup organising committee was an essential ingredient in this innovative move.

The three females came from the SAIW Foundation – an NGO which provides bursaries for young welders – and the two males represented the two TVET Colleges – Boland TVET College in Worcester and East Cape Midlands TVET College in Uitenhage – which have been selected to become the Centres of Specialisation for welding in a Department of Higher Education special project.

Ross is from Boland College and Cloete from East Cape Midlands.

The team was accompanied by team leader, MerSeta’s Ester van der Linde and Nell was invited to be a judge. “Both Ester and Raymond Patel, MerSeta CEO, have played an invaluable role in making the participation of South Africans in the Arc Cup possible. The SAIW and the South African welding community in general are most appreciative of their enthusiasm and dedication to the industry,” says Nell.

“BOTH ESTER AND RAYMOND PATEL, MERSETA CEO, HAVE PLAYED AN INVALUABLE ROLE IN MAKING THE PARTICIPATION OF SOUTH AFRICANS IN THE ARC CUP POSSIBLE. THE SAIW AND THE SOUTH AFRICAN WELDING COMMUNITY IN GENERAL ARE MOST APPRECIATIVE OF THEIR ENTHUSIASM AND DEDICATION TO THE INDUSTRY,” SAYS NELL.

The competition is organised in four categories: Student – aimed at school leavers; TVET and Training Colleges – aimed at meeting WorldSkills requirements and used to select the Chinese team for the WorldSkills international competition; Open – up to the age of 35 and Theoretical – test of theoretical knowledge.

They also had to assemble a specific project as per a drawing provided using all four welding processes – i.e. the three processes described above plus Flux-Cored Arc welding (FCAW).

Nell says he was pleased with the team’s results and hoped that future SAIW teams will do even better. “The Arc Cup is excellent experience for our welders to get used to international competition and hopefully in time we will consistently be at the top of the pile in this competition and WorldSkills competitions internationally,” he says.

He concluded that the South African welding community owes a huge debt of gratitude to the MerSeta not only for their financial assistance but also for their encouragement and enthusiasm. 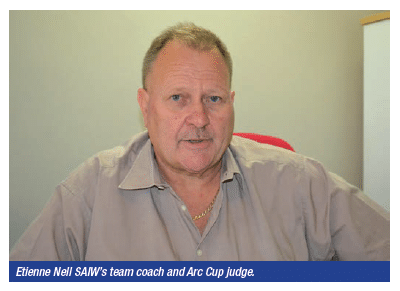