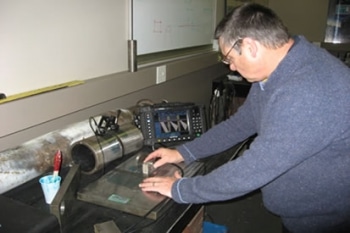 The Southern African Institute of Welding will invest what is necessary to run training courses, in ToFD (Time of Flight Diffraction), Phased Array and Eddy Current, advanced inspection techniques, which are growing rapidly in popularity in South African Industry.

SAIW NDT Senior Lecturer Mark Digby says that preparations are being made to kick both courses off beginning 2012. “Careful planning is required to get the right equipment and ensure our staff are properly trained and prepared. We will be doing this over the next few months to be ready to train, examine and certify according to the relevant standards by early next year,” he says.

Digby says that there is a growing demand for both these techniques in the South African NDT market. ToFD is often used for defect sizing in fit-for-purpose assessments and Phased Array is fast replacing standard ultrasonic and radiographic inspection.

“Although Phased Array has been around for some years, one of the problems has been the initial cost of equipment and training. But, as more people use it, the more cost-efficient the process becomes and the more popular it becomes,” he says.

He adds that the SAIW, being the leading NDT training organisation in the country, has decided that the time is now ripe for it to take the lead with respect to training these burgeoning advanced technologies.

Time of Flight Diffraction (ToFD) method of ultrasonic inspection is an extremely sensitive and accurate method of non-destructive testing, for the detection of volumetric and planar weld defects . ToFD is a computerised system that was invented in the UK in the 1970s for the nuclear industry by Dr. Maurice Silk. The use of ToFD enabled crack sizes to be measured more accurately, so that expensive components could be kept in operation as long as possible with minimal risk of failure.

Phased Array (PA) is an advanced method of ultrasonic testing. When applied to metals the PA image shows a slice view that may reveal defects hidden inside a structure or weld. PA is also well-known in medical applications for heart and fetus imaging.

The SAIW is also to add Eddy Current (EC) testing to its basic NDT training programme.

“EC testing is being used more and more in general industry for inspecting electrical conductive materials,” says SAIW NDT examiner Harold Jansen. “In the past it has been successfully used in the tube-inspection environment, where it has proven to be a quick and accurate method for inspection – for example, a 22m tube can be inspected in 30 sec for both internal and external indications, depending on material type and thickness. The main application has, however, been in the aviation industry where it has been extremely successful in the detection of defects in aluminium alloys,” he says.

“Experimentation and research over the years, has shown that EC can also be applied in weak magnetic (low magnetic permeability) materials, significantly increasing its scope of application and the advantages of EC testing are rapidly being recognised by an increasing number of NDT professionals,” says Jansen.

EC advantages include inspecting  hard-to reach areas (surfaces should be accessible to eddy current probe) such as turbine blade steeples and other odd geometrical shapes; in addition it can also be used for material sorting, conductivity measurements, corrosion detection and even heat treatment.

No direct contact is required with the testing material and the removal of coatings or rubber linings is not required. Defect detection can be performed through up to 10 mm of rubber linings (with no strengthening cables).

It is a comparative technique – detection and characterisation of indications are based on the influence of coil impedance, which is pre-determined by using suitable calibration and reference blocks.

“It’s a highly effective NDT technique but not necessarily easy to interpret or evaluate,” says Harold. “Training is therefore absolutely critical for its successful growth and implementation in general industry,” says Jansen.

SAIW executive director, Jim Guild says he looks forward to the implementation of these new training courses at the Institute. “NDT is an integral part of this institute’s responsibility and we are significantly upgrading our capabilities in this important discipline,” concluded Guild.