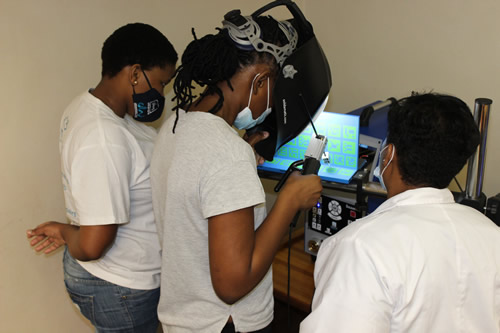 The South African Institute of Welding (SAIW) has announced the winners of its internationally recognised welding student training bursaries worth R120 000 each. Fhumulani Netshakhuma (22) and Palesa Mokoena (28) were each awarded a prized bursaries which provide a 28-week welding training course carrying both global recognition and access to opportunities for a welding career in 58 countries around the globe.

The bursary outreach program which takes place under South Africa’s COVID-19 pandemic lockdown has seen the SAIW come to the fore in motivating for employment upliftment to highlight the potential of welding as a profitable career path for the country’s youth generation.

SAIW Business Development Manager Etienne Nell confirmed the SAIW received 56 applications in total, each of which was required to be accompanied by a letter motivating why the applicant should be the winner of the bursary. “I and my colleague Mahlatsi Confidence Lekoane then compiled a shortlist of applicants which we followed up with a telephonic interview.

“Based on the answer to the interview questions, we chose the two bursary winners Fhumulani Netshakhuma and Palesa Mokoena for their purpose and enthusiasm. Both individuals meet the SAIW’s commitment to the upliftment of our South African youth and our goal of sharing the SAIW’s quality training opportunities.”

The bursary will give the two students access to the highly sought after International Welder Program over the next 28-weeks and will provide the candidates with an internationally recognised qualification where they are competent in the welding of carbon steel, stainless steel and aluminium material, using the four main welding processes (GMAW, GTAW, SMAW, FCAW).

The course follows an International guideline used across 58 countries and covers two weeks of theory, together with practical welding modules. The winning candidates will exit the course as highly skilled welders with opportunities to diversify into Welding Inspection, Welding Coordination or Non-destructive testing

The first of the two bursary winners, 28-year-old Palesa Mokoena was born and raised in Johannesburg. She received her Matric at Mbowa College and then had an opportunity to study further via a youth organisation where she opted to do a welding course.

Palesa says the reason for her choice is that a career in welding presents many opportunities in a largely male-dominated industry. “Given that there are far fewer female welders I thought why not grab an opportunity to do something different. Once I had completed my initial training I carried on my studies at the African International Training Facilities in Kempton Park in arc welding.

Following this Palesa saw a post on the SAIW’s Facebook page about the bursaries it was offering for 2021. She applied and sent through her motivational letter highlighting her existing skills, passion for the profession of welding and desire to take part in the bursary scheme.

“Unfortunately, when I sent my email I forgot to include my cellphone number and I didn’t have access to my email for a while so when I followed up with the SAIW the bursaries had already been awarded. Fortunately, a space opened up after another student had to drop out and I immediately accepted the offer!”

The second bursary winner is twenty-two-year-old Fhumulani Netshakhuma, who hails from Tsianda in Limpopo and expressed her gratitude for the opportunity this bursary brings in spring boarding her future career; “This is a great opportunity for me and I am grateful, I believe it is going to open so many doors for me and give me exposure to international countries. I could never have afforded to study welding and I believe when my community sees me prosper it will inspire them to reach further.”

A friend initially pointed Fhumulani to the bursary opportunity post on the SAIW Facebook page. Asked where she now sees herself in 10 years, Fhumulani responds “I see myself growing within the industry. I would like to study further once I have had exposure to the international welding industry. My dream is to be an engineer.”