The 2019 SAIW Welder Challenge competition, which was held from 14-18 January 2019, went off with a bang with more than twenty participants from many parts of the country displaying a skill level unprecedented in this competition. “It once again proved to be the foremost skills test for young welders in South Africa,” says SAIW caretaker executive director Jim Guild.

SAIW’s Samuel Mnguni, the head judge for the competition, said that the standard of the competition was so high that the results were a close call. “Fortunately, we utilise an objective rather than a subjective marking technique which means we are able to very accurately discern the ultimate winners,” Mnguni says.

He added that the increased involvement of those who are teaching the youth welding skills is most encouraging and with their support, the SAIW will continue to extend the footprint of the competition throughout the country. “We are particularly pleased with the participation of TVET colleges and we hope to work even more closely with them in the future.”

The overall winner, Stefan Lottering, won a cash prize of R15 000 and joined an illustrious list of winners of this competition, including Thembinkosi Matyeka, Houston Isaacs and Jaco van Deventer, who have gone on to stellar careers in the welding industry. 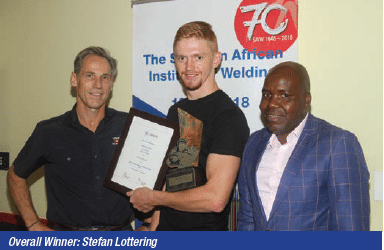 Guild says that Stefan’s effort is a credit to all the youth of South Africa who are involved in the welding industry.

“Like Thembi, Houston, Jaco and many others, Stefan is an example of the wonderful opportunities that welding offers young people who are looking for an exciting and rewarding career. The reason we hold this competition is to encourage young people from all over the country to demonstrate their skill level in welding and to compete against the best the country has to offer. It gives all participants a view of their skill level and motivates everyone to improve,” says Guild.

He adds that the SAIW Welder Challenge competition is an industry initiative and would not survive without its sponsors. “We are all grateful that the sponsors understand the continued importance of this competition in terms of encouraging welding as a career for our youth,” he says.

SAIW’s Etienne Nell who has been central to the growth of the SAIW Welding Challenge over the years was also ebullient about this year’s competition: “The SAIW biennial Welding Challenge has certainly become one of the premier technical competitions in the country. The standard is always high and the enthusiasm electric – and this year was no different. The 2019 group of  competitors was the best yet. It’s very exciting that the standard of welding among our youth improves every year.”

The competition, which was run strictly along the standards and protocols of the WorldSkills competition, was to find the most proficient welder in three material categories: carbon steel, stainless steel and aluminium using four welding processes: SMAW, GTAW, GMAW and FCAW. There was a prize in each category as well as the overall winner and overall runner-up. 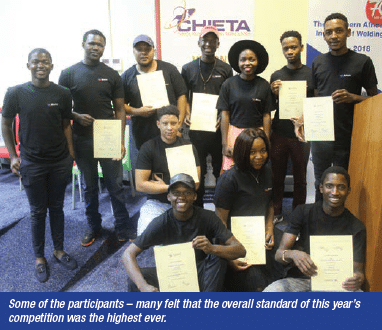 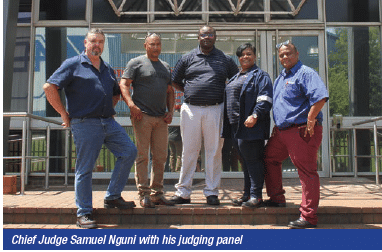