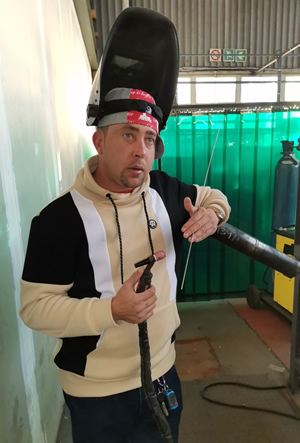 Welding and the name Cole Pienaar are synonymous with each other, and his is a story that resonates with everyone that has big dreams. Coming from humble beginnings in Durban, SAIW alumni Cole always promised his parents a compressor each – a Mercedes Compressor for his mom and an air compressor for his dad who, as a panel beater, played a big role in the direction that Cole chose to take in life.

Cole’s passion for welding began as a young child with a love for working with his hands alongside his dad. After high school, he joined a technical college in Durban where he completed a course in fitting and machining. But unlike many others, Cole’s true love was inspired by a vivid dream in which he saw a colourful workshop with oxy/acetylene equipment, welding machines and bays, guillotines, rolling machines and bench presses. And this is how his welding journey began.

Faced with two job opportunities at the same time, Cole made a clear decision to follow his dream and rejected a more favourable opportunity for one that paid less at the beginning but allowed him to do what he loved and get his trade. His career at Transnet began with an assessment in fitting and machining, and the moment that he entered the welding school to be assessed, he realised that his dream had come true.

Cole recalls all the failures of his assessments as well as a tutor that seemed unapproachable. Things looked very bleak especially after he was told that he wasn’t suitable for the position, even to the point that his instructor would not recommend him for the welder apprentice program. And this was his response: “Sir, I must tell you that I might not be the most intelligent person here, however, I am the hardest worker by far. If you give me this one chance, I will be the best welder apprentice that this school has ever seen! I will make you proud in the time to come. I will do my best and more. If you grant me this opportunity sir, the first thing I will do is paint your entire welding school by myself. I will not let you down.” He was subsequently appointed by Transnet and completed his trade test in March 2009.

Before this, his tutor sent his details to the SAIW for the 2009 Young Welder of the Year competition, and Cole was blown away by the fact that there was an institution dedicated to Welding alone, and he wanted to expand his knowledge and fulfil the promise that he had made to be the best welder. As Cole recalls: “ I met some phenomenal people at the SAIW like Herman Potgieter, Jim Guild, Mr Willie and others, and this is when I truly fell in love with welding.” Cole was a winner in the Carbon Steel and Stainless Steel categories, but the experience changed his life.

He knew that he had to go back to the SAIW, and started saving money when he began working as an Artisan Welder. Between 2009 and 2021, Cole completed numerous courses through the SAIW, including:

These courses have equipped him with a deep understanding and even deeper respect for the welding industry, as well as given him employment opportunities that he wouldn’t have otherwise had. He has enjoyed exposure in the railway industry at Transnet in many different sectors and worked for companies like Protea Engineering on vessel fabricating projects, tanks and pressure piping.

Cole has an incredible outlook on life in general. He believes that nothing is impossible, and that, regardless of failure and error, there is always hope. He maintains that our life purpose is to lift each other and is extremely grateful for the people he has met at the SAIW that lifted him on his journey. Passion is ignited through prayer, hard work, learning and humility, and he looks forward to sharing his knowledge and experience in welding with the future generations both in our country and beyond our borders.