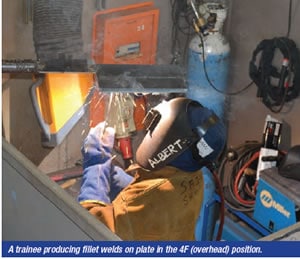 Following four years of CHIETA-funded planning and curriculum development work, the Quality Council for Trades and Occupations (QCTO) has released a new national welder qualification for welders that is now ready for implementation and which matches IIW standards.

Talking at an education solutions seminar hosted by Lincoln Electric on May 9 and 10, 2017, SAIW’s Etienne Nell presented a talk entitled ‘A Sparking Change’ about the new choices South Africa has made with respect to welder training and certification. “How many welders do we need in South Africa?” Nell asks as the question of the day. “Welding has been identified as one of the scarce skills in South Africa and a worldwide shortage, with the AWS indicating a shortage of 250 000 skilled welding personnel by 2020,” he says.

Adding to the problem, he says: very few welders are properly qualified and certified; very few meet the required skill level needed for new and existing projects; very few are qualified for the welding processes or for the positions required on these projects; and very few welders or employers understand the term ‘coded welder’.

This leads to the need to do something more to develop skilled welding artisans, because: “welding skills secure employment with excellent financial prospects; new projects require highly skilled welders; of the legislation requirement embedded in our National Health and Safety Standards; welding skills are required for compliance with quality standards”.

Facilities accredited by SAIW Certification, which is the International Institute of Welding’s (IIW) Authorised National Body (ANB) in South Africa, are at the starting point of any long-term solution to the welding skills problem. “ANBs seek to achieve excellence in the training, examination and qualification of welders throughout the world,” Nell says.

IIW-accredited training bodies (ATBs) in every member country now follow a detailed welder-training guide called the ‘Bratislava Agreement’, which was developed and agreed by all 56 IIW member countries.

Articulated in full in the IIW Guideline document entitled: ‘International Welder, Minimum Requirements for the Education, Examination and Qualification’, the Bratislava Agreement seeks to achieve ‘harmonisation in the training, examination and qualification testing of welders in the world. It provides for the assessment of both theoretical knowledge and practical skills, the latter being linked to the requirements of ISO 9606 (or equivalent standard) …’

“The new South African QCTO curriculum, is 90% based on the Bratislava Agreement,” says Nell, which makes it a truly international curriculum.

This was looked at over a period of over two years by a welder training curriculum development committee consisting of senior academic and industry stakeholders, including: Etienne Nell from SAIW, Tony Paterson from Wits University, Louis Petrick from Eskom, and people from Bell, Coega, PetroSA; Caltex; Sapref, and several other stalwarts of the South African welding industry.

Apprentices already on existing schemes may finish these programmes, but the new welding artisan trade tests will be QCTO-based within the next three to four years.

“If one looks at the total number of hours a university student spends before being granted a degree, it equates to about 5 400 hours. Of that time, the direct number of contact hours per week is often low: the holidays are long and study leave is counted.” Nell says.

“The welder training committee thought it best to stop labelling university trained professionals as ‘white collar’ and artisans as ‘blue collar’. So now, to become an artisan, a candidate still has to do 5 400 hours of training so that everyone is on the same level,” Nell says.

The QCTO curriculum is structured around credits, with each credit equating to 10 notional hours of time. That means that artisan courses now consist of a total of 540 credits to give the 5 400 hours that makes them equivalent to a university degree.

Breaking down the general QCTO artisan training course curriculum requirements, Nell says that 20% of the 540 credits, 108 credits, is allocated to theory; a second 20%/108 credits to practical Institutionaltraining at a training facility; while a third 20% is allocated to relevant workplace experience. This applies to all occupations.

The remaining 40% is left up to individual training committees to allocate depending on needs of their occupation.

Being based on the Bratislava Agreement’s International Welder curriculum, the QCTO’s Occupational Certificate: Welder is structured around practical cutting and welding activities, including: performing cutting operations using oxy-fuel, carbon arc and plasma processes; producing fillet welds on plate; producing fillet welds on pipe; producing butt or groove welds on plate; and producing butt or groove welds on pipe – with each positional skill having to be developed using SMAW (MMA), GTAW (TIG), GMAW (MIG/MAG) and FCAW processes.

“From now on, all welding training providers will have to comply with this structure – and the instructors delivering the theory component need to be qualified artisans themselves, with experience and the requisite knowledge components,” Nell says.

“While the curriculum is written and ready, the welding trade test development is yet to be completed,” Nell says. This is being done via the National Artisans Moderation Board (NAMB), also with Nell’s participation. “We are currently determining the requirements and assessment criteria and, once completed, we will proceed to the approval of testing facilities,” he says.

1 This is a listed trade qualification that falls within the Occupational Qualifications Framework of the NQF of South Africa.
2 Industries employ welders qualified as artisans, but they need them to perform the code certification requirements using ‘Coded Welders‘ according to the relevant national standard applicable to the scope of work, (PER or Structural)
3 The implementation strives to eliminate skills imports by providing highly skilled local welders to our labour market.
4 The availability of this qualification, aligned to international standards is regarded as an important resource to support national artisan development.

“This qualification ensures that a sound skills base is developed at artisan level that will serve as the foundation for achieving the coded welder status required by the national standards used in South Africa,” he adds.

“We at the SAIW have been IIW-focused for over 16 years now and we have already applied for QCTO accreditation for our training school. Our 2017 intake of foundation students will be the first group to be taken through the new QCTO-curriculum,” Nell concludes.