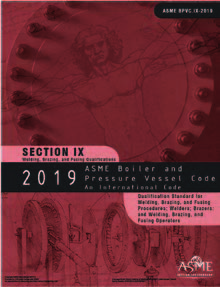 Welding standards are always being reviewed, updated and revised. The policies and timelines for new editions are unfortunately different between the main standards being utilised in South Africa, for example ISO standards will cover a full six step process that might run the course over a couple of years.

ASME is currently publishing a revised version every 2 years for the Section IX part of the Boiler and Pressure Vessel Code and the American Welding Society (AWS) is currently on a 5 year publication cycle for the popular D1.1 standard.

This might lead to some confusion with regards to the usefulness and applicability of an organisation’s existing welding documentation (PQRs, WPSs and Welder Performance Certificates). In this article, the relevant sections of the most popular standards/codes used in South Africa will be quoted directly from the most current version of the standard.

QG-108 QUALIFICATIONS MADE TO PREVIOUS EDITIONS

Joining procedures, procedure qualifications, and performance qualifications that were made in accordance with Editions and Addenda of this Section as far back as the 1962 Edition may be used in any construction for which the current Edition has been specified. (All emphasis by the author)

Joining procedures, procedure qualifications, and performance qualifications that were made in accordance with Editions and Addenda of this Section prior to the 1962 Edition may be used in any construction for which the current Edition has been specified provided the  requirements of the 1962 Edition or any later edition have been met. (All emphasis by the author)

Procedure specifications, PQRs, and performance qualification records meeting the above requirements do not require amendment to include any variables required by later Editions and Addenda, except as specified in QW-420*. Qualification of new procedure specifications for joining processes, and performance qualifications for persons applying them, shall be in accordance with the current Edition of Section IX. (All emphasis by the author)

*(QW-420 covers the Base Metal Groupings and is not intended to be quoted for this article).

Qualifications which were performed to and met the requirements of earlier editions of AWS D1.1 or AWS D1.0 or AWS D2.0 while those editions were in effect are valid and may be used. The
use of earlier editions shall be prohibited for new qualifications in lieu of the current editions, unless the specific early edition is specified in the contract documents. (All emphasis by the author)

What is quite clear from all the standards mentioned above, is that existing documents are quite valid, once the requirements as stipulated in the applicable standard has been met. New documents must be written or qualified to according to the latest/current version of the applicable standard. For example, an ASME IX: 2007 PQR can be used to write a new WPS, covering the essential variables and adhering to ASME IX:2019 and any new welder or existing welder without the applicable qualified ranges will be tested according to ASME IX: 2019.

For any assistance or enquiries with regards to your existing and or new welding documentation, please contact SAIW Technical Services at (011) 298 2100 or info@saiw.co.za