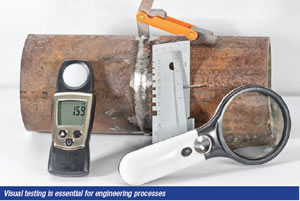 “I see no more than you, but I have trained myself to notice what I see”.

These words from the renowned fictional detective Sherlock Holmes, capture the essence of one of the most popular Non-Destructive Testing (NDT) methods utilised today, called Visual Testing. Visual testing, as the term implies, is the visual observation of material or components, big or small, throughout its ‘engineering lifespan’ which stretches from initial manufacture, through the formation/ shaping processes, during assembly and construction, until commissioning, operation, in-service testing and maintenance up to the final decommissioning phase.

Visual testing is an essential tool to assess any engineering product, within a specific sector, throughout it’s engineering ‘life’ to ensure optimum performance by eliminating or addressing ‘obvious visual’ problems.

Visual testing can be described as the interaction of the visible portion of the electromagnetic spectrum with a test surface (or volume, in the case of translucent materials) and the consequent observation of changes in the light beam, which in this case is the inspection medium, caused by the presence of a discontinuity.

Mirrors may be used to modify this angle of vision or even to illuminate the inspection surface. Magnifying lenses (usually not exceeding 10 x magnification) may be used to assist the testing process.

Indirect or remote visual testing relies on the use of equipment such as borescopes, fiberscopes, video probes or cameras, manipulated via mechanical means, such as remotely operated robots or drones, to make a hard to reach surface visually observable. In both cases, the image resolution, also referred to as image detail, must be comparable and aspects such as digital pixel size and colour image sensors come into play.

Translucent visual testing can only be performed if light can be transmitted through the material under test. This technique is very seldom used in general engineering since most engineering materials are opaque.

The difference between visual testing and visual inspection

It is clear from the techniques mentioned above, that visual testing usually relates to the identification of discontinuities relating to either welded (as per ISO 5718), casted (EN1559 Parts 1 to 6) or wrought (EN 10163 Parts 1-3) products.

Visual inspection on the other hand can be considered as the overall component inspection and includes aspects such as geometric verification, compliance with fabrication specification and overall structural integrity.

Engineering components, therefore, have to undergo both visual inspection (looking at the component as a whole) and visual testing (having a closer look for discontinuities that might influence the operability of a component).

The competence of visual testing personnel is obviously critical, whether inspecting according to ASME, ISO or EN manufacturing codes. ISO 9712, the internationally recognised standard for qualification and certification of NDT personnel, can be used as the foundation to implement, manage and develop personnel competence within the field of visual testing, whether it is competence verification by the manufacturer, company certification (authorisation) or third party conformity assessment schemes that is required.

In general, responsibilities are assigned in accordance with the qualification levels, as stipulated within ISO 9712, with Level 1 personnel performing the visual tests, Level 2 personnel guiding, supervising and reporting on the tests results and the Level 3 personnel creating and maintaining the quality environment within which these tests are conducted. Needless to say, Level 2 and 3 personnel should also be able to operate at level 1, and similarly level 3s should also be able to perform the duties of Level 2 personnel.

The course content can be divided into similar sections, whether it’s level 1, 2 or 3. The aspects, extent and complexity will however differ.

The training course kicks off with a basic introduction during which time the history, objective and basic terminology is covered. This is followed by the physical / theoretical fundamentals relating to vision, light, optics, material attributes, etc. Since the basic equipment used during visual testing is the human eye, it is pretty certain that a thorough understanding of its workings, related limitations and problems, will form an intricate part of the visual testing course, regardless of the level.

Product knowledge relating to welds, castings and forgings in accordance with the relevant ISO (or EN, if no relevant ISO code exists) or ASME (also ASTM/API, where applicable) codes are addressed. Additional equipment, designs, applications and limitations are also discussed.

Operations prior to, during and following inspections, such as reporting, are covered and students are, throughout the course, expected to complete assignments and tasks so their learning progress can be assessed and to allow them to master the required skills for inspecting and reporting on the various product sectors covered by the pre and in-service industry sector.

Related quality documentation such as written instructions and procedures are included, with level 2 and Level 3s respectively expected to compile their own documents relating to samples provided

Following the successful completion of the training course, students are expected to pass the independent qualification examination, as described in ISO 9712. Only after the relevant industrial experience under qualified supervision and based on a structured industrial experience matrix has been concluded, will the student be eligible for certification.

NDT certification needs to be renewed / recertified every five years as per the requirements of the personnel certification body.

Visual testing is essential for engineering processes and the value added by the testing report is directly related to the competence, dedication and attitude of the inspection personnel.

‘Competence’ can be defined as the continued development (learning, mentoring and demonstration); evaluation (examination, assessment and approval); mastering of skills through defined experience and outcomes, ability to perform Non-Destructive Testing tasks as per the competencies defined within the various qualification levels.

Furthermore, competency should be confirmed at realistic intervals via personnel certification, company authorisation and even customer approval, through a systematic process.

Remember, dedication and attitude is accomplished through hard work and perseverance!

Please contact the SAIW  should you have any further queries.