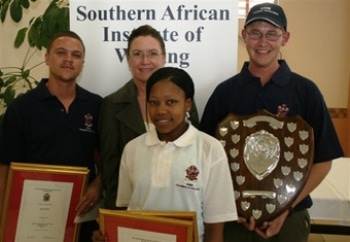 Top of the Pops!!

Louis Steynberg is the 2009 Young Welder of the Year!!

I’m very happy about winning this and cannot wait to go and compete against the best in the world at the WorldSkills Competition in Calgary, said Louis. I can assure you that I will be trying my best to do the SAIW and South Africa proud, he added.

Louis who hails from Uitenhage has been studying at the Eastcape Midlands College (EMC), a Centre of Excellence, where he completed the International Welding Training (IWT) programme and is now a qualified International Institute of Welding (IIW) welder. Bruce Daniels, one of Louis’ lecturers says that Louis has always been an outstanding student. Of course we are delighted that that he won the competition, but not surprised. Daniels added that Louis’ win was also a credit to the IWT programme and the school. It proves that the content of the programme and the way in which it’s being taught at EMC are of the highest standards.

In the meantime Joy Mining’s Nonhlanhla Zulu is the first female to win a major prize in any Young Welder competition having come out tops in the carbon steel category. Her work was outstanding in what might be the most difficult category, said Young Welder official Ted Barwise.

The competition, which is a biennial event, aims to promote skills excellence in the welding community. It seeks to identify one young welder – no older than 22 years of age- who is proficient in the welding of carbon steel, stainless steel and aluminum.

All young welders in South Africa were invited to enter the competition, the first round of which consisted of an individual assessment of entrants in the different regions. Once the finalists were selected, they received a copy of blueprints of the exercises which had to be carried out and they then had the opportunity to practice and perfect these exercises before being flown to Johannesburg by the SAIW to compete in the four day competition at the Institute’s welding school, said Nell.

The competition was judged by a panel of industry experts and several trophies and prizes were awarded to the finalists. The main prize for the overall winner, sponsored by the Merseta, is a trip to compete in the 40th World Skills Competition to be held in Calgary, Alberta, Canada in September 2009. Other sponsors for the event were Afrox (Fabrication Division), AFSA, Air Products South Africa, Alexander Binzel, Amalgamated Welding and Cutting, ArcelorMittal, Bohler Welding, CSIR, Goscor Arc Welding Solutions, Highveld Steel & Vanadium Corporation, Lincoln Electric Company, Macsteel Tube and Pipe and Sassda. Babcock Fabrication, Columbus Steel, Hulamin, Stalcor and VRN Steel also contributed towards sponsoring the competition.