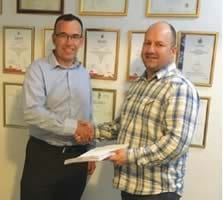 The Southern African Institute of Welding (SAIW) has acquiredthe assets of Cape Town-based NDT Academy of South Africa (NASA) with effect from 1 January 2018.

According to SAIW executive director, Sean Blake, the acquisition is in the interests of both parties and the industry as a whole.

“SAIW has traditionally not offered Non-Destructive Testing (NDT) training services in the Western Cape and, with this acquisition, it will now be able to offer in Cape Town its ISO 9712-accredited NDT training courses which complement its  Welding Inspection and Welding Technology courses already offered through SAIW Cape Town,” he says.

In line with the agreement, NASA Cape Town will cease to trade and its clients will be serviced from expanded SAIW premises at the current location in the Milpark Centre on Koeberg Road.

Utilising the combined course material, infrastructure, systems and procedures from SAIW and NASA Cape Town will result in synergies and cost-efficiencies for all concerned in and around the region. “For our members and other industry players their NDT, weld inspection and welding needs will be better and more cost-effectively met with this arrangement,” Blake says.

NASA Cape Town CEO, Ben Buys, who will continue as a SAIW lecturer, is delighted with this development. He concurs that the acquisition is to the benefit of both organisations and the industry as a whole. “In line with our ongoing drive to expand NDT services in the Western Cape the acquisition of NASA Cape Town by SAIW, which has a solid reputation, excellent skills and infrastructure, will be a significant boost to us realizing this goal,” he says.