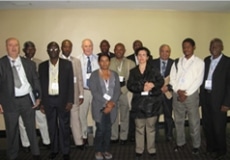 At the recent world conference on NDT the opportunity was taken to arrange the final meeting of the AFRA/IAEA NDT project coordinators. AFRA is the African Regional Cooperative Agreement for:

Research, Development and Training Related to Nuclear Science and Technology (AFRA). AFRA is an initiative of the International Atomic Energy Agency (IAEA), an association to facilitate regional cooperation between its member states in order to address development problems including the application of appropriate nuclear science and technology and the sharing of resources and facilities in the African region. A total of 12 countries participated in the meeting which reviewed the success and achievements of the AFRA/IAEA sponsored project which was aimed at improving regional self-sufficiency in NDT. AFRA and IAEA will continue to support NDT activities in the region and will build on the progress made to date. However, the organisations will have smaller numbers of countries participating.