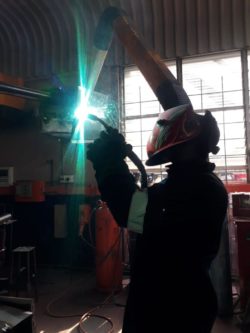 For matriculant Stephan van Heerden, perseverance and a willingness to start from the bottom up, has allowed him to discover his potential and talent for the artistry of aluminium welding; one which has secured him a job building an aluminium yacht over the next three years, backed by an internationally-recognised welding certification through the SAIW’s IIW International Welder programme.

With student sponsorship from his employer, the possibility of such a high-profile international qualification was the furthest idea from Stephan’s mind when he started at an entry-level position. “I started at the bottom of the company and over the past four years, I’ve managed to work myself up to the position of junior manager, with a lot of patience and guidance from my employers. Last year, the owner approached me with the idea of assisting him to build an aluminium yacht and in 2021 I joined the IIW International Welder programme to secure the necessary skills.

“It was only when I started my training at the SAIW earlier this year that my eyes were opened for the first time to the possibilities of welding,” explains Stephan. “I had never welded in my life before and on first starting the course, I felt a little overwhelmed, but as soon as I saw the techniques required, I got a handle on how to manage the welds properly and neatly. I love that I can create something and see the results right in front of me. Building something with my hands makes me feel capable,” he asserts.

Interestingly, Stephan says he showed flair as an artist while still a learner at school, with one of his art project pieces currently hanging in a gallery in Japan, revealing that creative talent can support acquiring the skill of welding which can combine both technical skills and creative flair.

Looking at the specific training Stephan will receive namely the IIW Aluminium programme, this world-class course runs over 28 weeks and provides a combination of theoretical knowledge and high-level practical skills. It is assessed by tests of increasing difficulty and by theoretical examinations, with each day bringing a new challenge for students to solve in achieving a globally recognised welding qualification.

According to SAIW Market Development Manager Etienne Nell; “Stephan is moving through the different course modules incredibly quickly, which will take him through fillet welding, plate welding and then pipe welding. Just four weeks into the course and we are already seeing just how hands-on he is. Stephan is well on his way to achieving his IIW globally recognised qualification and is rendering welds that experienced welders are only achieving with 12 years of experience.”

According to Nell, aluminium can be one of the most difficult materials to achieve a professional weld. “When working with steel welds, the metal turns red when it heats up allowing you to clearly see the welding area. However, with aluminium welds, the metal remains white when heated so there is no indication of progress. A lot of the weld is therefore managed by ‘feel’ and that is a hands-on skill which can prove challenging,” explains Nell. “Aluminium also forms an oxide layer during a weld which often produces several defects and requires both cleaning and some controls be put in place to minimise defects.”

In terms of the support Stephan has received from his employer, it’s clear that he has earned the current training boost to his career. His manager states; “Throughout his employ, Stephan has displayed high levels of commitment, honesty and dedication. All these attributes are things that any employer searches for and finding this is a young man is somewhat unusual. We are further pleased that he has ‘taken the bull by its horns’ and that he will not only make us proud but also develop his skills which he can apply for many years to come. The decision to send Stephan on this course was made far easier given the personal interaction the SAIW gave us. Your interest in visiting our business made us realise that he would be in good hands, and we are delighted that Stephan has progressed so well at SAIW.”

Looking ahead, there are plans for Stephan to apply his newfound welding skills in two applications. Firstly, by moving him into a new business that his existing company has established, which is developing a range of designer furniture that will incorporate mixed media such as aluminium, steel, wood and glass to market high end selected furniture. In addition, Stephan will assist in the construction of an Exploratory Aluminium Yacht which will be built in Cape Town. His new welding expertise will be a critical contribution to the construction of this vessel as the ultimate aim is to sail this into the most remote and cold regions of the planet’s oceans.