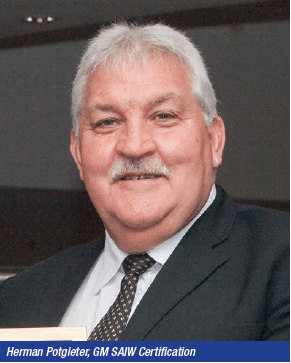 Gaining ISO 3834 company certification is a statement that the fabricator has a system in place which will allow the manufacturer to produce a welded product to an appropriate standard and conforms to the standards to which the product is manufactured.

A complaint is defined as: A written submission sent to SAIW Certification Secretariat, either via e-mail or registered post, whereby a Complainant officially lodges a complaint in respect of the competence, integrity or quality of work of any Certified Company.

An appeal is defined as: A written request made by any interested party for reconsideration of any substantive decision made as a result of a Complaint, an Inquiry Panel or other body of SAIW Certification.

SAIW Certification will appoint a Complaints Panel, consisting of at least 2 members from the Welding Fabricator Board to consider the complaint.

b) The Welding Fabricator board may suspend the Manufacturer’s certification for a period of time until the reasons for suspension have been corrected and certification can be re-instated.

c) The Welding Fabricator board may revoke the Manufacturer’s certification if it is deemed that the cause is of a serious nature.

Where a Manufacturer is aggrieved by the decision of the Inquiry Panel, the Manufacturer may lodge an application for Appeal as per the procedure. An Appeals Panel will be appointed by the Welding Fabricator Board to consider the
matter.

Legal representation is not allowed in the SAIW Certification Complaint hearing, Inquiry hearing or the Appeals hearing as these are dealt with as internal issues. However, the Appeals panel will have the discretion to allow either party legal representation in cases that are of a very serious or complex nature. Parties do have the opportunity to use the legal justice system, however, it is recommended that the internal procedure is followed to its conclusion.

The background to the complaints and appeals processes are that SAIW Certification must uphold the standards of a body which is certifying companies giving them credibility in the field of manufacturing fusion welded products.

It is attesting to the ethics and quality of companies. Consequences for certified companies breaching the standards of the ISO 3834 certification scheme can be severe. At the same time, the certification body has to be fair and transparent.

Wherever needed, the good practices that are expected of a certification body are applied so, for example, no member of the panel may have a conflict of interest in relation to a complaint and the organizations involved. Impartiality has to be seen as well as practiced.

SAIW Certification encourages all parties to submit a written complaint where they believe that the principles of the certification scheme have not been upheld such that the integrity, credibility and reputation of the IIW Manufacturer Certification Scheme can be maintained. SAIW Certification cannot act on cases of hearsay, but requires evidence of non-compliance that can be thoroughly investigated and followed-up on.

All enquiries in this regard should be submitted to Mr Herman Potgieter who is the Secretariat for the Welding Fabricator Board and CEO of SAIW Certification.