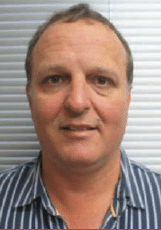 In the Spotlight – Paul Bruwer

In our series of profiles of people who have made a difference to the Welding/NDT Industry and the SAIW, we talk to Paul Bruwer, SAQCC CP-PV (Competent Person Pressure Vessels) and and IPE (Inspector of Pressurised Equipment), a Member of SAQCC CP/IPE Committee, Certification Board and on the SAIW Board of Directors.

Paul was born in Parys, Free State, schooled at Hoerskool Sasolburg and went on to attaina National Higher Diploma in Metallurgical Engineering and and M.Eng. in Welding Engineering. Today Paul is Principal Inspection Specialist at SASOL overseeing both the AIA In-Service and AIA Manufacturing Departments.

Paul has been married to Malene for the past 31 years and they have two children, Tyrone (31) and Monique (25) and are Grandparents to Tristan (17 months). In his spare time Paul likes to play golf and is an ardent Free State rugby supporter.

F: Give us a brief outline of your career

PB: In 1985 I started as a trainee Metallurgical Technician at Iscor (now ArcelorMittal). Then, in 1991, I joined Sasol as a Metallurgical Technician. My welding and inspection career didn’t really begin until a decade later in 2000 at Sasol Secunda Inspection where I became a manager for in-service inspections and later manager over the AIA department within an allocated group. From this position I developed to where I am now.

F: What does your current position entail?

PB: As Principal Inspection Specialist (Divisional Manager) for Sasol Secunda Inspection Authority I have numerous responsibilities including, to a large degree, all inspection activities, adherence to the Pressure Equipment Regulations and the resolution of any anomalies. I am supported by an exceptional inspection team.

F: How did you get involved with the SAIW?

PB: My involvement with the SAIW started in 2000 when I did my first course – Welding Inspectors Level 1. As my involvement in the industry grew I became increasingly better acquainted with the Institute and ultimately ended up in the roles I now fulfil at the SAIW.

F: Specifically describe your interest and link with CP and IPE

PB: I’m exceptionally grateful to be the manager of one of the biggest Inspection Authorities in Southern Africa consisting of a large work force of CP and IPE Inspectors who conduct daily inspections related to in-service and repairs to pressure equipment.

F: What do you think of the standard of Welding/NDT in South Africa and could you comment on the role that the SAIW is playing.

Welding: The standard of welding in South Africa generally measures up to international benchmarks. As with every field of expertise, striving for perfection is an ongoing process requiring determination and this is pertinent to welding in South Africa especially in the sense of delivering more competent and qualityconscious welders.

NDT: NDT in Southern Africa has become a very reliable source of quality assurance and is on a par with international standards compared with only two decades ago. Sasol’s NDT Level III is part of the SAQCC NDT Scheme Committee and assists SAINT and the newly formed Professional Body of NDT to promote and establish suitable means to ensure that all end users and service providers receive the best NDT solutions.

The SAIW plays a vital role in imparting the necessary theoretical and practical knowledge to keep these two industries on a worldclass level in Southern Africa. It is a professional and well-run organisation.

F: Any comments on the macroeconomic situation in South Africa and how this affects the local welding/NDT/steel industry?

PB: The uncertain state of our politics and economy at present definitely affects our business. But I am a firm believer that we have the power to overcome these obstacles and that we should use this opportunity to establish our independence from unpredictable economic cycles. We have excellent people with the skills and intelligence to have a global impact in the future. It is important to realize that whatever one does, one is in control of one’s own destiny.