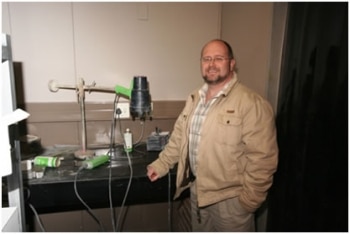 Harold Jansen, examination coordinator at the Southern African Institute of Welding (SAIW), has been promoted to the position of NDT Manager at the Institute, in order to fulfil on the strategy of growing its interest in NDT. In the new position, while retaining his current responsibilities, Jansen will be responsible for the future development of SAIW NDT and will oversee developments in training and other areas of interest.

Harold was recently awarded the Reissner award at the World Conference on Non-Destructive Testing (WCNDT), held in Durban during April 2012.

The award was presented for the best paper presented by an African during a world conference. The title of Harold’s paper was “Eddy Current Testing: Profiled eddy current probes for complex shape inspection”. The content included in the paper discussed the design and manufacture of complex shape eddy current probes to facilitate the inspection of awkward geometries and areas where access to inspection surfaces are limited to specially designed probes only. The paper will be published in African Fusion later in the year.

“I really did not expect to win the award since the quality of all the papers presented was of very high standard, technically and theoretically. Furthermore, I had omitted all of the complex calculations and modulations from my paper, in order to show the ‘elegance’ of the eddy current method, as opposed to getting lost in the theoretical aspects,” says Harold humbly.

Harold is appreciative of having won the award as it affords him the opportunity to increase awareness throughout the industry of the capabilities of the eddy current testing method. The Eddy Current method is generally limited to testing electrically conductive, non-magnetic material. However, through experimentation and design, materials having a low to moderate magnetic permeability can also be inspected. “It also provides me an ideal platform to achieve the goals and objectives of the NDT division and fulfil on the requirements of my new position”, says Harold.

Mr Jim Guild, executive director at SAIW, says that it is an objective of SAIW to promote the knowledge of applied science and mathematics through the training of Non-Destructive Testing personnel. It therefore endeavours to give members of the highly competent NDT lecturing team exposure at national and international conferences, through the presentation of papers and posters.