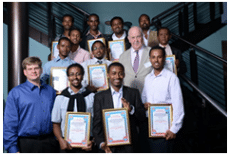 A group of 12 Ethiopian Metal Industries Development Institute (MIDI) employees recently came to South Africa to gain industrial experience through a structured practical training programme. The members of the group were all qualified to level two in four NDT methods and the training was funded by fellowship grants from the International Atomic Energy Agency (IAEA) in the context of an Ethiopian national NDT project. During their visit the group of Ethiopian inspectors received what are believed to be the first IIW diplomas awarded to Ethiopian nationals.

The Ethiopian government has identified growth of its metals industry as a priority for future national development and, to achieve its objectives, it founded the Metals Products Development Centre (now MIDI). SAIW has been working with MIDI to train personnel in NDT since 2007 and the two organisations have shared a Memorandum of Understanding since that time.

An opportunity arose for the group to attend an IIW welding inspector course presented by SAIW, which is the South African IIW Authorised National Body. All 12 trainees were successful in the IWI (B) examinations and now hold the IIW Welding Inspector qualification at basic level. SAIW executive director, Jim Guild, says that he expected no less than a 100% pass rate in the examination, as Ethiopian trainees are renowned at SAIW for their hard work and dedication. “It usually takes them a week or two to refresh their English language skills but, after that, there is no holding them back,” adds Guild.

Whilst they were in South Africa the MIDI employees were able to attend an SAIW presentation function to receive their diplomas. Berhanu Tibebu, the senior member of the trainee group, was delighted to have had the opportunity to attend the IIW course which he felt would be extremely valuable in advancing their careers and because of the widespread international recognition of IIW qualifications. Tibebu stated that more trainees would be attending IIW courses in the future and that MIDI and SAIW are discussing how to make this a reality.