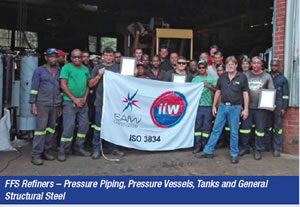 The demand keeps on growing for ISO 3834 certification. This is according to Herman Potgieter CEO SAIW Certification which manages the ISO 3834 certification process. “Sometimes people support something only because they see so many other people doing it. But this is not the case in our industry because we think about things carefully before we do anything,” he says.

“In simple terms the demand is growing because ISO 3834 certification is so very important,” says Potgieter. “It’s the basic stamp of quality in the welding fabrication business and it is a considerable boost to one’s business potential.”

He adds that ISO 3834 certification is for all fabricators. “I must reiterate that this is not for big companies only. It’s for all companies. In fact smaller, lesser known companies could benefit more because this stamp of approval shows they’re on a par with the best.”

All these companies now have IIW Manufacturer Certification Scheme certificates that testify compliance with ISO 3834: Quality requirements for fusion welding of metallic materials.