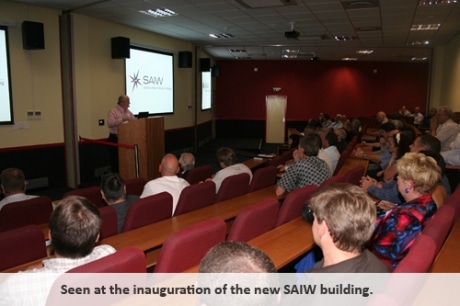 In opening the new SAIW building and auditorium, on Friday 25th February 2011, Columbus Stainless Steel Manufacturing GM, Lucien Matthews, said that the primary industry wholeheartedly supports the SAIW in its endeavours. “We understand the importance of the Institute in respect of the fabrication industry and the resultant use of our products,” he said.

Matthews pointed out that the importance of quality welding cannot be overemphasised. Sitting on a high-speed train or in an aeroplane one is grateful for the quality of welds holding these machines together and one can only reflect on the criticality of welding generally in modern society.”;

“In this regard we are all grateful for the work that the SAIW does in being the custodian of quality in the welding industry. The institute is a world class trainer of welders and does its best to promote the local use of fabricators through its accreditation schemes.”

Matthews said that this is all vital, not only for the welding and related industries, but for the South African economy as a whole.

“On behalf of us all I wish the SAIW good luck with all its undertakings,” he concluded.