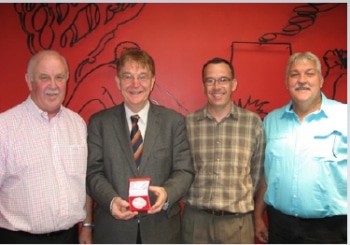 Chris Smallbone is well remembered as the former president and executive director of SAIW. Chris left South Africa to take up his current position as CEO at WTIA in 1994. Chris visited South Africa in April 2012 for a holiday and attended the WCNDT conference in Durban. During his visit he met with Jim Guild, current executive director, and the management team of SAIW to exchange ideas and establish cooperative initiatives. Chris was named an Honorary Life Member of SAIW in 2003 and during the visit he received one of the silver medals which SAIW recently created to recognise the contribution made to the Institute by Honorary Life Members.