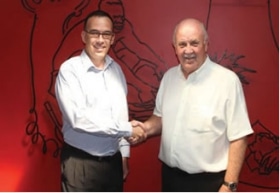 Changing of the Guard

Jim Guild, Executive Director of the SAIW since December 2000, is retiring and will be leaving his post at the end of this month. Current SAIW GM Operations, Sean Blake, has been appointedSAIW Executive Director as of April 2015.

Sean Blake (l) will become SAIW Executive Director in April. Jim Guild (r) has retired after 14 years at the helm.

Jim says that his tenure at the Institute can be described as “steady progress”. The fact, however, is that it is more apt to describe Jim’s achievements as massive. When he started at the end of 2000 the SAIW was really a very small organisation with no international recognition of its courses, it was struggling financially and was reliant on sponsorship for its viability.Today it is the leading welding training organisation on the continent. Its courses are recognised internationally; it has more than doubled its training population and has earned the respect of the global welding community. Financially it still enjoys good relations with sponsors but it has greatly improved its level of self-generated income and has an appropriate level of reserves which it can use for the next level of development.

“I put our successes down to exceptional team work,” says Jim. “From the beginning of my tenure the old stalwarts, like Ted Barwise, for example, rallied around me to help get things going the way we wanted. Their input was absolutely invaluable. Since then each and every person at the Institute has played his and her part to ensure that we met our goals and achieved what we did,” Jim says.

The achievements were astounding:

2001: SAIW became a Regional Designated Centre (RDC) of the African Regional Cooperative Agreement for Research, Development and Training Related to Nuclear Science and Technology (AFRA). It acted as AFRA’s Anglophone centre for NDT in Africa. Since then, the SAIW has trained around 500 African fellowship students sponsored by the International Atomic Energy Agency (IAEA). The SAIW has also conducted numerous expert missions to assist other African countries to establish NDT training and service facilities and has hosted several scientific visits from NDT personnel throughout Africa. The IAEA periodically sends three experts from around the globe to assess the SAIW standards.

Welder competition plays an increasingly important role in promoting welding as a career to the youth of South Africa.

2005: Established SAIW Certification which has served to enhance the credibility and recognition of SAIW qualification and certification activities and offers good future growth opportunities.

2006: Introduced permanent representation in Cape Town and Durban and in 2013 established a fully-fledged training facility in CapeTown with a similar facility in Durban imminent.

2006 and 2012: SAIW hosted IIW Regional Congresses attended by speakers and experts from all over the world.

2008: SAIW accredited by the IIW as an Authorised National Body for Company Certification (ANBCC) enabling it to certify fabricators to the ISO 3834 standard. To date, more than 100 companies and sites have been certified by the SAIW.

2011-2013: Built and equipped a cutting-edge metallurgical and mechanical test laboratory; built a state-of-the-art multi-purpose auditorium and completed the refurbishment of the interior of the SAIW building.

2014: Established SAIW Foundation which will become an industry vehicle for social upliftment and development.

Other accomplishments over the period included:

* SAIW became an associate member of the International Committee for Non-Destructive Testing (ICNDT) and established the African Federation for Non-destructive Testing (AFNDT), which is now recognised as a regional body by the ICNDT.

* Since 2009 the SAIW has been accredited for its personnel certification activities by SANAS which is South Africa’s member of the International Accreditation Forum (IAF).

“One of our very important accomplishments,” says Jim, “was the improvement in our communications. This newsletter, Fusion, has played a major role in disseminating SAIW and industry information to our members and the welding market in general. Our journal, African Fusion, has helped in giving the industry at large an opportunity to keep up to speed with technical and global welding news and issues. I thank all those involved in the production of these important publications.”

“I want to thank all those who have helped me in a job that I have really enjoyed – the various SAIW Councils and Presidents, the great SAIW team, our members, our industry contacts and all our dedicated suppliers. I couldn’t have done the job without you.”

“Finally, to Sean. There is still much to be done but you are now at the helm of an organisation which is recognised as a leader in its field and that has the provisions for significant future growth. You have the experience and the wisdom to take the SAIW to unprecedented heights and I look forward to your and your teams’ future successes. Good luck!”